The appellation New world says it all about the Americas; that this landmass was 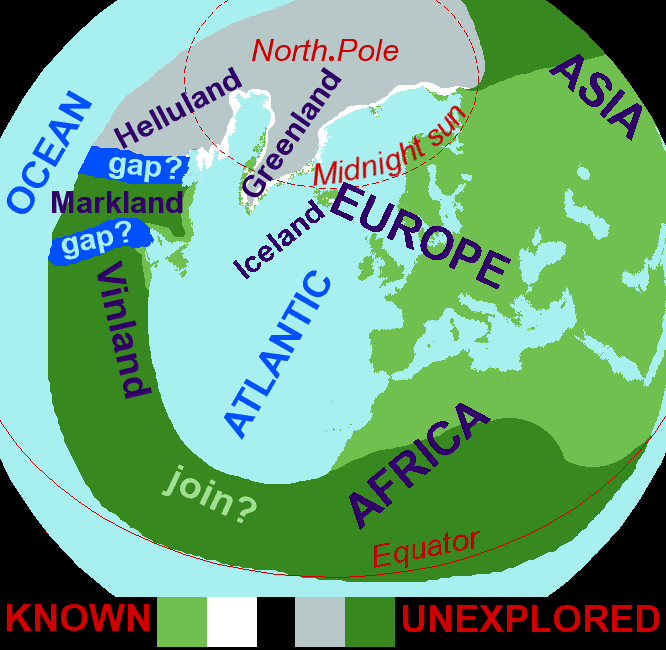 The medieval Icelandic conception of northern regions, based on an interpretive sketch. Illustration by David Trochos for Wikimedia Commons. Based on A.A. Bjornbo “Vikings: The North Atlantic Saga” (ISBN 1560989955) p262.

a world that was not known to have existed before the old world. What made Americas new? And for whom was it new? And why were they discovered so late?

Sea-faring across oceans was after all older than the 15th century (see Thor Heyrdahl’s amazing reproduction of possible Polynesian expeditions, the Kon tiki expedtion) when Columbus discovered America, no? Indeed, the unravelling of this appellation New World helps us understand the causes and processes of the European conquest of the Americas, which looks like a mix of warfare (on the short-term) and colonisation (on the long-term). Of course, it must be said that the title New world does no justice to the fact this was certainly not new to many peoples, say for example the Inuits or the now confirmed norse colonisation of the Greenland and the Americas.

“The Last Days of Tenochtitlan—Conquest of Mexico by Cortez” —1899 painting by William de Leftwich Dodge, depicting the Fall of Tenochtitlan, final battle of the Spanish conquest of the Aztec Empire in 1521. Photograph of the painting from Tulane University, New Orleans by User:Infrogmation for Wikimedia Commons

In his book, Guns, Germs and Steel, Jared Diamond begins with a similar question posed to him by Yali, an indigenous Papua New Guinean. Yali asks Diamond why his (Diamond’s) people came to conquer Yali’s people with ships, weapons and all their other “stuff” and not the other way round. Indeed, a very important and somewhat universal pattern in global history is the Eurasian people’s conquest and colonisation of many parts of the world, be it Australia, the Americas, Africa and South Asia. Diamond’s title Guns, germs and steel says it all: the technological improvements that gave Europeans their weapons (guns), the immunity to small pox and plague that they acquired through centuries of population decline bottlenecks (germs) and the ability to smelt metal and make alloys such as steel were indeed instrumental in this conquest. This is of course in

contrast to the (then) dominant narrative (most historical narratives of the conquerers survive) of the Spanish conquest of the new world as having been merely due to the might of their armies (or having God on their side as the case may be). In fact, many of the travelling armies encountered empty cities. Entire cities of indigenous people in North America perished due to the new germs, especially small pox brought in by the hordes of peoples that started colonising North America following Columbus’ discovery.

What spurred Columbus at that point of time (several theories and evidences exist for pre-Columbian American expeditions) to go looking then for the new world? Indeed, the causes for this are embedded in developments east of Europe in what is today referred to as the Middle East. The fall of Constantinople to the Ottoman Turks in 1453 was a culmination in a series of events that indicated the growing influence of the Turks in redefining boundaries and power balances in that region. With the fall of Constantinople (and its rechristening into Istanbul, in view of the changed management!), an important land trading route between Europle and the East (South Asia and China) was cut off. This was an important trading route. The middle east is called so, because it is in the middle; in the middle of a historic trading route that really marked the beginning of globalisation. European markets consumed in those days silk from China, spices (pepper for example) from India, animals from East Asia etc. All this came to a grinding halt with the fall of Istambul. Indeed, this early fall of European markets was an important contributing factor for European powers (Spain and Portugal, the Dutch, the English) to begin a quest to find a sea route to the East. And that was what Columbus was hoping to find, a sea route to India. 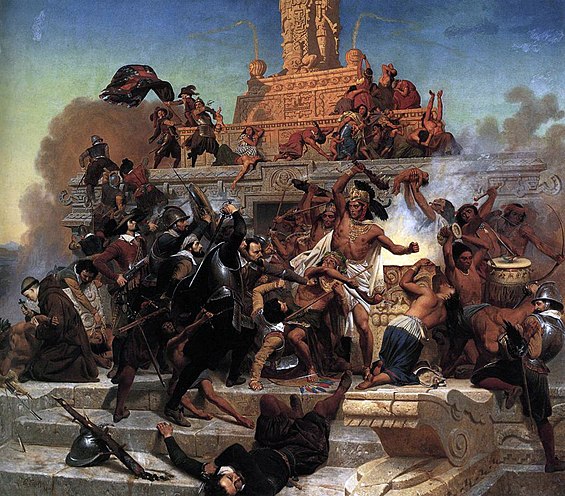 Storming of the Teocalli by Cortez and his troops as painted by Emmanuel Leutze based on description of the events at Tenochtitlan in June, 1520. In Prescott’s words this represented ” the final struggle of the two races, the decisive death grapple of the savage and the civilized man, with all its immnse results”. Click image for notes from link to California State University page.

And then coming back to Yali’s question, on what were the reasons that it was the Europeans who invaded the Americas and not an Inca emporer for example who invaded Spain, what we know now clearly points to the reasons are embedded in that human technological advancement in Europe spurred by a semi-globalised old world, where innovations like agriculture, political systems, technology and language spread easily and widely. In comparison, there was relatively lesser exchange among the cities of the Americas. Jared Diamond attributes this in part also to the orientation of the Americas (north-south) as opposed to the east-west orientation of the massive landmass of Eurasia. This allowed early hunter-gatherer communities that were experimenting with agriculture to share their seeds and varieties of plants with each other. Naturally, many other innovations such as agriculture could be replicated only at the same latitude (same climatic zone), whereas, the diversity of climatic zones was much more in the Americas, resulting in much lesser exchange between their peoples.

Tlatelolco marketplace as depicted at the Field Museum of Natural History, Chicago. The largest Aztec market was located in Tenochtitlan’s neighbouring town, Tlatelolco. Photograph for Wikimedia Commons by Joe Ravi

This is of course not to say that the American peoples were “primitive”. For example, Tenochchitlan was a massive city in the early 15th century. Certainly, there was written language, agriculture and political systems in these large cities. Animal domestication for example was also independently achieved in the Americas, albeit these were different animals (llamas and alpacas mainly, but also at least one breed of dog by American Inuit communities) from the Eurasian ones (camels, pigs, chicken, horses, cows). However, the sort of trade and exchange that was happening in Eurasia and the innovations and technologies that this gave rise to, were lacking in the Americals, simply because there was no need for this. Their cities grew in relative isolation and were self-sustaining. At the same time, the 15th century American cities were also unprepared for the onslaught of new diseases. Perhaps Eurasian germs killed more American people than their weapons. In fact, it has been argued that many of early Eurasian germs had their origins in the different animals that we domesticated. At the same time, the Aztec empire of the time apparently was no emancipator of the masses itself. Internecine warring among chieftains and oppression of other peoples around them was somewhat ritualised in the then city of Tenochtitlan.

The conquest of the Americas seems to have been a consequence of human technology, germs and is a symbol (like elsewhere) of human capability of violence and destruction as well. The past 500 years of a slow process of emancipation of several indigenous people and the then enslaved communities is an example of an unmaking of historical mistakes that we (human beings) have inflicted on fellow human beings.

For an early critical review (short one) of Guns, Germs and Steel, see Tom Tomlinson’s review

Some insights drawn from Worlds together, worlds apart by Tignor and others.